It’s not only the end of a year, it’s the end of a decade. The Northern Arizona Suns are currently in their fourth season in the NBA G League, and although the team history doesn’t have a lot of depth, the talent pool is aplenty.

The Suns have had nine call-ups in their short history, eight players. That’s tied for the second most unique player call-ups any team has had in NBA G League history through its first three seasons of existence (behind Delaware’s nine from 2013-16, tied with Santa Cruz’s eight from 2012-15).

With the NAZ Suns own talent pool, combined with assigned and Two-Way players from the Phoenix Suns, Prescott Valley has seen its share of NBA quality basketball.

When considering the all-time best team of the decade, combining all of the seasons together, who would you choose at each position? Are you looking for a pure scorer? Maybe a deep threat, or a midrange specialist? Or how about a defensive pest that can get it done on the other end as well?

Well, we took a stab at making the Northern Arizona Suns All-Decade Team, sifting through all of the great players who have come and continue to play in Prescott Valley. Have problems with the list? Reach out to our complaint department. 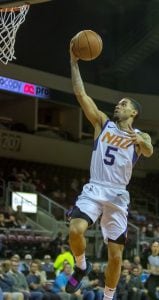 Josh Gray is the most unlikely player to make this list based on how he started, but he never doubted his talent for a second. Gray is one of the best stories the NBA G League has ever seen. He began collegiately at Texas Tech, transferred to Odessa College, a junior college, in Texas, and then played two years at Louisiana State. He went undrafted, and tried out for the Northern Arizona Suns in their inaugural season. Needless to say, he made the team.

In 2017-18, Gray broke out. He started the year as a reserve again, but his talent could no longer be kept out of the starting lineup. He quickly became the Suns’ go-to guy, earning an NBA G League Player of the Week Award in the first week of January 2018. Then the ultimate award came…he was called up by the Phoenix Suns in February, a local tryout turned NBA player. He got two 10-day contracts with Phoenix before returning to NAZ to finish out 2017-18. That season, he had the most points by a Suns player in a game (42), seven 30+ point games and 22 20+ point games. He averaged 19.4 points in 45 games (28 starts), 6.6 assists, 4.8 rebounds and 2.4 steals. 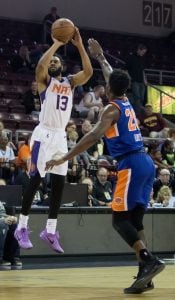 XJ – the X-man – X – whatever you want to call him, there’s no denying Xavier Silas is one of the best shooters in NAZ Suns history. One of the few returning players who came to Northern Arizona from the Bakersfield Jam, Silas actually missed the first part of that season. It was for good reason though, it was for the birth of his son!

In 2017-18, Silas welcomed the new Suns’ fast-paced offense and modern inside/outside game by taking 9.4 three-pointers per game. He made 38.0 percent of them, shooting 88.2 percent from the free throw line again, this season averaging 18.4 points, 4.1 rebounds and 1.1 steals per game. He appeared in 43 games, starting 42 of them. His season was so impressive, he was invited to join and made USA Basketball’s FIBA World Cup Qualifying Team. First, he played in the NBA G League International Challenge, then he faced off against Cuba and Puerto Rico in FIBA competition. After the NAZ Suns season ended, Silas was called up by the Boston Celtics as they made a playoff push. 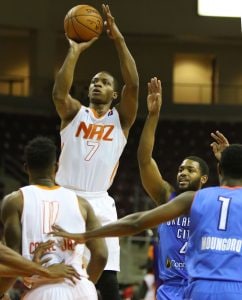 Elijah Millsap played in the NAZ Suns inaugural season, and arguably had the best single season in team history. Millsap was a one-man wrecking crew, doing everything a team could ask for. He started and played in every Suns game in 2016-17, averaging 19.8 points, 8.0 rebounds, 4.0 assists and 2.1 steals in 36.9 minutes per game.

Through a NAZ Suns player’s career, Millsap has the third most 20+ point games (23), and he did it in just one season! After the season concluded, Millsap got the long-awaited call, the Phoenix Suns were signing him for the rest of the year. 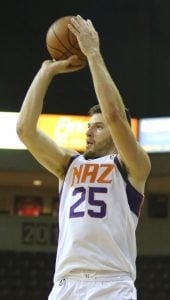 Alec Peters was the first Two-Way player in Suns history, and he immediately proved he was one of the best forwards in the NBA G League. Either playing the three-man or a stretch-four, Peters could shoot with the best of them and get inside to secure the rock.

Peters averaged 17.6 points on 41.1 percent shooting from distance, getting 9.0 three-point attempts per game. He also shot 85.1 percent from the charity stripe, adding 7.2 rebounds and 1.9 assists in 35 games (all starts). Peters’ 41.1 percent from distance is the second best mark in team history. He had the second-most three-point makes (130) in a season in Suns history. His scoring average is second best in team history, and his rebounding average is third best.

To end his rookie season, Peters played in the Phoenix Suns’ season finale. He finished the game with 36 points, including eight three-pointers while shooting 61.5 percent from beyond the arc against the Dallas Mavericks. 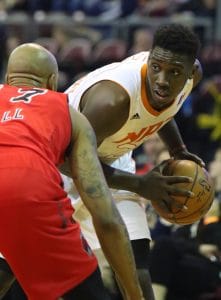 Johnny O’Bryant played the fewest amount of games of anybody on this All-Decade Team, but he had one of the best runs in team history. O’Bryant joined the Suns after their inaugural training camp and immediately went to work.

O’Bryant averaged 18.4 points, 8.8 rebounds and 1.0 steals per game in 25 games (all starts). He earned the first NBA G League Player of the Week Award in team history in January of 2017. Then he earned the first call-up in team history when the Denver Nuggets signed him. While still on the Nuggets, O’Bryant was named the first NAZ Suns All-Star. He played in the game, then returned to the NAZ Suns for one game before getting a second call-up, this time to the Charlotte Hornets. He would remain on the Hornets for the rest of the season and well into the following year.

O’Bryant had 11 20+ point games in his 25 Suns contests, scoring 10+ points 22 times. He recorded 10 double-doubles on the year, the third most double-doubles in a single-season in team history, despite the fact he played in half the team’s games.