Bret Burchard wanted to chart his own journey, to create his own identity. The price meant living next to cornfields for six years, two of which he spent sleeping in the back of a barbershop.

Burchard, the Northern Arizona Suns head coach, was known mainly for those two things growing up in Columbia, Missouri. When it turned into, “Oh, you’re Bret’s parents!” that’s when he knew his path was fulfilling his goal.

Burchard grew up around the game of basketball on a college campus. His father, Bob, was an infamous coach at Columbia College, who held the position for 31 years up until this past February. His mother, Faye, was the dean for student affairs for 27 years at the same school until she retired in 2016.

“She’s over campus life, he was athletic director and basketball coach, so they ran basically two-thirds of the school,” Burchard reminisced as his first season as NAZ Suns head coach came to a close. “My sister and I, we were raised on the college campus and part of the student activities all the time, part of all the athletic events all the time. In junior high, my school was right across the street from the college, so end of the school day, I would just walk across the street, stop at my mom’s office to get a snack, then mosey over to the gym and do my homework during practice. We were raised on the college campus.”

With parents as influential in the community as Bret’s, it was hard for anyone to see Bret for who he was as a person instead of who he was related to. Thus came the tough choice of bypassing the opportunity to play college basketball under his dad at Columbia College. He chose instead to play for Taylor University in Upland, Indiana.

“Whether I was in class or in the dorms or on the basketball court, I’d always be, ‘Oh, that’s Bob’s son – that’s Faye’s son,’ and I’d never get a chance to chart my own path,” Burchard said. “It was kind of cool, I went to Taylor to play and the first time my parents came out to Indiana to visit, they met some people and they were like, ‘Oh you’re Bret’s parents!’ That’s why (I didn’t go to Columbia College). I wasn’t Bob and Faye’s son anymore, I was Bret, and I could chart my own path and build my own identity.”

Of course, Burchard wouldn’t be anywhere close to where he is now without his parents’ influence. Basketball was a key part of life for the whole family. 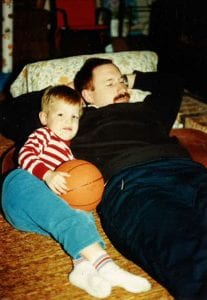 “I didn’t know there was anything else for a long time,” Burchard said. “I think there was always a little bit of me that said I would follow in my father’s footsteps. I didn’t realize that would be at the pro level, I always expected to be at a small college and that environment. There was a moment my mom tried to talk me out of it so I explored some other things, but in my gut it was always coaching. It’s what I love to do, it’s what I would do even if I wasn’t getting paid for it. I was raised in it.”

He stayed true to that sentiment shortly after his undergrad years. He took on an assistant coaching job with Taylor University for two years, also serving as the assistant sports information director for the school and the sports information director for the conference. Oh yeah, he was also getting his Master’s degree at the same time. He spent roughly 16 hours a day working and studying, while trying to get his eight hours of sleep at home, which for those two years was in the back of a barbershop.

Burchard looked elsewhere for his next opportunity after finishing his Master’s because “six years in the cornfields of Indiana was long enough.” He reconnected with his old boss at the Phoenix Mercury, where he had interned in the summer of 2008. In May of 2010, eventual Mercury president and current Connecticut Sun vice president Amber Cox hired Burchard back with the Mercury in a communications position. 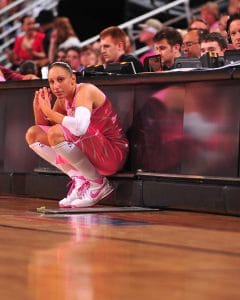 “It was supposed to be like a summer deal, just for the season and then figure it out from there, and that just rolled into a communications job with the Suns and Julie Fie,” Burchard said. “So for three years I was doing both, it was 12 months of basketball, just rolled one season into the next.”

In 2013, the Phoenix Suns went through a coaching change, bringing on former player Jeff Hornacek to lead the squad. With the change, there was an opening in the video room, and Burchard transitioned back into the coaching world where he belonged.

From assistant video coordinator to head video coordinator, to the NAZ Suns as an assistant coach, to associate head coach of the NBA G League team, back to the Phoenix Suns as a player development coach and now finally the head coach of the NAZ Suns, it has been a wild journey for the 32-year-old. Nine years now Burchard has been with the organization in a fulltime capacity, reaching the NBA, which had been more of his father’s dream than his own.

“I had no long-term goal to be a coach in the NBA,” Burchard said. “When I was little, my dad and I would watch NBA games together, Thursday night NBA games – ‘Bret you got to find a way to make it to the NBA.’ I was like, ‘Dad, I’m not a good enough player so I’m not going to play in the NBA, and I’m going to be a small college coach just like you. I’m probably going to take over Columbia College when you’re done.’ Like, that’s what I’m going to do. Then the first day in Phoenix, first practice I texted him and said, ‘I made it. I don’t know how, this was your dream, not mine, but here I am.’” 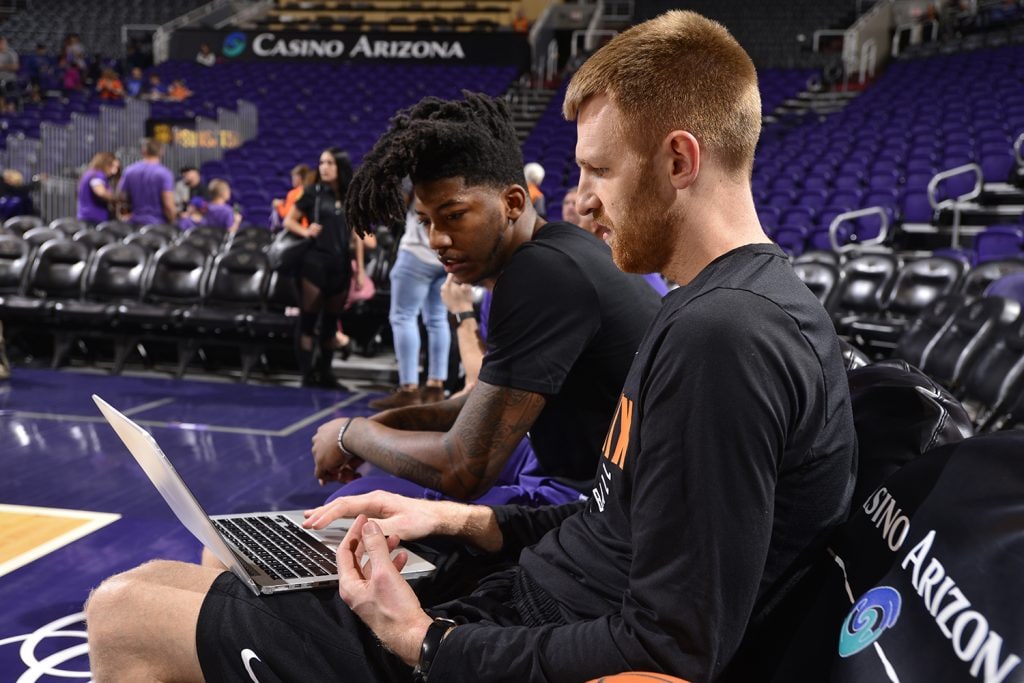 Although Bob never coached in the NBA, he is a legend in his own right. He was inducted into the Missouri Basketball Hall of Fame in 2008 and the NAIA Hall of Fame in 2012. More importantly though, he impacted hundreds of young lives, and he is Bret’s biggest role model, especially now that the two are linked in the same profession.

“I’ve had times this year where I’ll go back and reflect on something I did during a game or during a practice or see myself on video and be like, ‘Oh my gosh, that was my dad.’ So I can see his influence there,” Burchard said.

Burchard’s first season as NAZ Suns head coach has come and gone, and he’ll be the first to say it was a challenging one. His team went 12-38, obviously not a glowing mark, but in the NBA G League, development is king over winning. Many players made huge strides in their game, and everyone grew professionally. 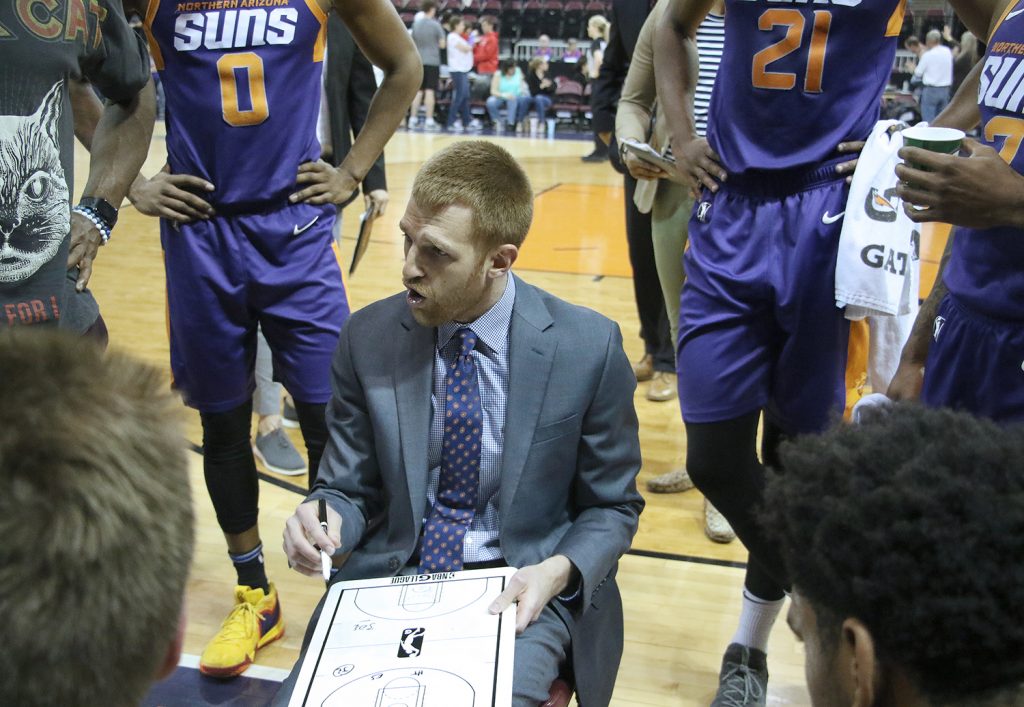 “I think what I’m most proud of is that our team stuck together through the whole thing,” Burchard said. “With the record, the losing streaks, this and that, there were a lot of opportunities for them to give up, to quit, to turn against each other, and it never happened. They stayed together, they worked hard, and they continued to play hard and try to do the right things, so that’s what I’m most proud of for the year.”

It was also a great learning experience for Burchard himself, who had never been a head coach at any level before. He had great people throughout his life to learn from though, including his dad, his college coach and Hall of Famer Paul Patterson, former NAZ Suns head coach Ty Ellis and countless others.

“I think I got to the point in my career where I’ve learned a ton, I’ve taken a lot of notes, I’ve built a lot of different philosophies, and then kind of narrowed down to my philosophy and what I would do. I was at the point of either I need some old wise man to tell me that it’s not going to work and to change it, or I need to go do it and find out if it works or not,” Burchard said. “So that’s what I was expecting, to get thrown into the fire and find out what I didn’t know, that you only learn by doing it. And that’s happened. I’ve learned a ton and have a lot to improve on. Things are already in mind of what I’m going to change and do better for the next time, so I’ve gotten out of it what I was expecting.”

Burchard’s plans this summer include pre-draft work for the Phoenix Suns and spending time with his wife, Tayler, who he married this past month. That’s something he can thank the Suns for as well, as he met Tayler on her last day of employment in the productions department when the two crossed paths during lunch. The two will get up to Prescott Valley as often as they can this summer, taking advantage of the outdoors, as they both love to hike.

As far as what the future holds, Burchard isn’t a fan of making long-term goals, because things change so much all of the time. But you better believe one thing will be in the cards.

“I like basketball, I like coaching, I like helping people, so as much as I can do that, wherever that is, I plan on doing that,” Burchard said.