Around the World is a common backyard basketball game, undoubtedly proving who the best shooter is in a group of friends (at least, that’s what the winner says). For Northern Arizona Suns assistant coach James Andrisevic, basketball’s Around the World takes on a whole new meaning. The phrase simply describes his life.

Andrisevic grew up in Lee’s Summit, Missouri, a suburb of Kansas City. He made his mark playing basketball at Lee’s Summit North High School before multiple shoulder surgeries forced him to go the junior college route. After spending two years at Johnson County Community College in Overland Park, Kansas, Andrisevic transferred to Arizona State. That would be one of the last few bits of stability for the next 15-plus years in his journey that even went worldwide.

Andrisevic was a Sun Devil from 2002-05 and part of ASU’s NCAA Tournament team in 2003. It was a team that knocked off John Calipari’s Memphis squad in the West Regional First Round, a Tigers team that also included former NAZ Suns assistant coach Earl Barron. Andrisevic said it was his favorite career-year of playing.

“It was a good team that played hard and cared about each other and was talented. It was just really fun to be a part of,” Andrisevic said. “That was probably my favorite year.”

The now 37-year-old went on to play professionally in England, Denmark and Germany. Injury interrupted his playing career once again, this time a knee injury. He spent a full year rehabbing. He tried to resume his playing career, but it was cut short completely.

“I got about three-fourths of the way through the season and my knee gave out again. That’s when I realized it was time to get into coaching,” Andrisevic said.

He always knew he wanted to be a coach when his playing days were over. His coaching career kicked off at Drake University, where he spent two seasons as an assistant coach while getting his MBA at the same time. He transitioned to the professional coaching realm from there.

“I always thought I wanted to be a college coach and after doing that for a couple years and then spending some time at the pro level, this is definitely, for me, what I enjoy better,” Andrisevic said.

So overseas he went, becoming head coach of Asker BC in Norway’s top basketball league. He quickly turned heads, as he led the youngest team in the history of the league to the championship round. He moved on to be head coach of BC Prievidza in Slovakia before returning to the States.

Andrisevic joined the NBA G League (then the NBA Development League) and was a member of the Santa Cruz Warriors coaching staff for three years, rising as high as associate head coach under Casey Hill. Andrisevic said Hill provided some of the best lessons in his career, who in turn had learned from his dad and longtime NBA coach Bob Hill. In 2014-15, the Warriors were league champions under Hill and Andrisevic after going 35-15 in the regular season, the best mark in the Western Conference.

His world tour continued after his Warriors’ stint, this time in South Korea where he took an assistant coaching role. In 2017-18, he was named head coach of the Hiroshima Dragonflies in Japan’s professional basketball league, the B. League. After that, he returned to the NBA G League, joining the Northern Arizona Suns as an assistant coach under Bret Burchard. 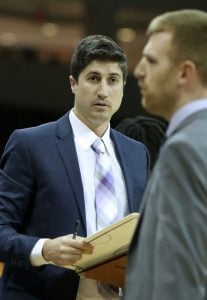 “I really enjoy this level. Obviously the NBA is the highest level and everybody wants to get there, but the G League, there are a lot of guys that want to get better and are hungry and they work hard,” Andrisevic said. “Those guys are fun to work with.”

Andrisevic plans to stay around the Valley this summer. He has no reason to leave, after all, as his closest family is now all out in the Phoenix area, including his parents (Gilbert), sister (Phoenix) and grandma (Scottsdale). So finally, now 17 years later, Andrisevic has come full circle, finding that stability once again in Arizona.